The winter is coming and along the possibility of Caspian Gulls on Portuguese shores and inland landfills. Caspian Gulls Larus cachinnans have only one approved record submitted to the portuguese rarity comitee, and 2 more pending for evaluation, unlike Spain wich surely surpasses 150 sighthing records, the lack of records cannot only be due to our extremely western location, and I strongly suspect that the lack of Knowledge on how to identify this species is the main cause. 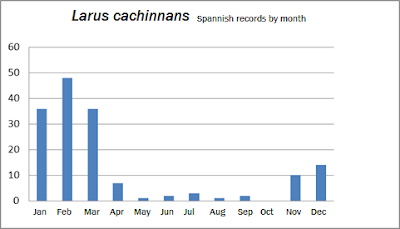 On the persuit of this "elusive" species, I decided to take a better look on the putative 2cy caspian seen by Pedro Ramalho last January in Peniche , only one video record of this individual has been taken, and although seen by some gull experts, their opinions were divergent regarding this gull ID.
The dark underwing coverts, and the plain yellow-legged gull like tail band, are the strong cons against a caspian ID, however they do not exclude by itself a positive ID of caspian gull. 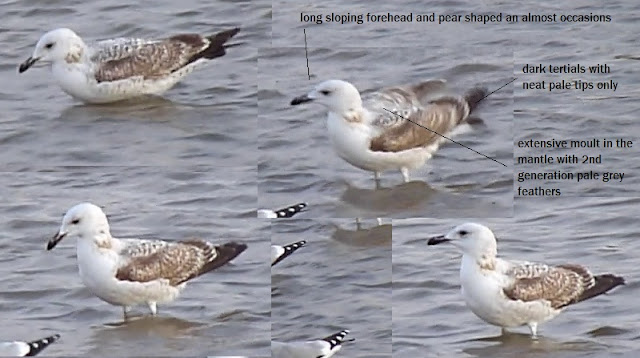 I must say, I have never came across with such a caspian like gull as this one, even behaviour is a strong point to caspian, the posture adopted during the regular agressive attacks towards the other gulls present, with wings raised is well known among caspians, but also on yellow-legged to a less degree, unfortunetly the albatross long call exclusive of caspian was not seen or heard, but the agressivness was underligned by the observer, "The gull was constantly attacking other gulls with no apparent reason, like food, always jumping with wings raised... " 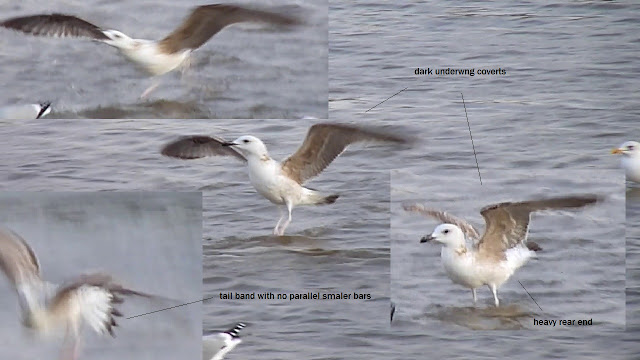 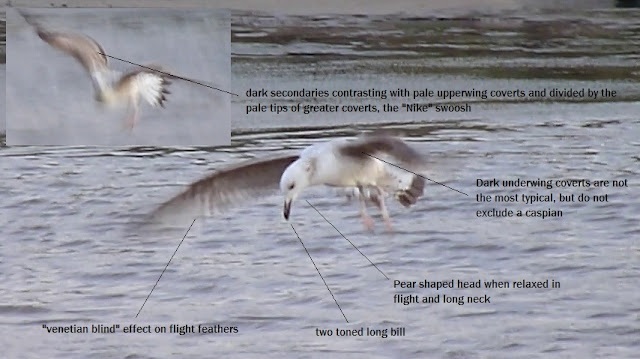 Such a dark underwing could even take us to a more remote possibility : "heuglini"
2cy "heuglini" type gulls could have a caspian like appearence, even mantle shade seems in some individuals to approach the light grey of yellow-legged gulls or darker caspians but have wider tail bands resembling more lesser black-backed gulls. Some examples of 2cy "heuglini" here or here.
The underwing seems to be real uniform dark, however it could be only an artefact from the photo, caspian showing dark streaked underwings are known to occur, example: 1 , 2 , 3 . 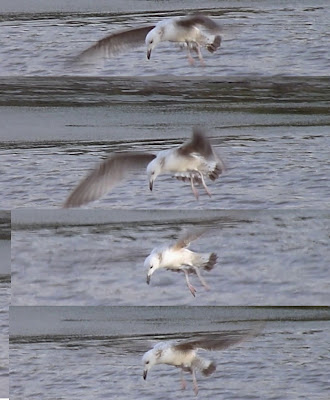 Structure also points to caspian in my opinion, its slender and elegant, with higher profile than yellow-legged gull, long tibia, and it seems to be heavier on the rear end/lower belly, a trait not show by most yellow-legs, more common on big males from the mediterranean subspecies, and of course present on most herring gulls and caspians. When in flight the long neck is obvious, along with the pear shaped head and long pointed bill, at this point much different from any yellow-legged gull I have ever seen. 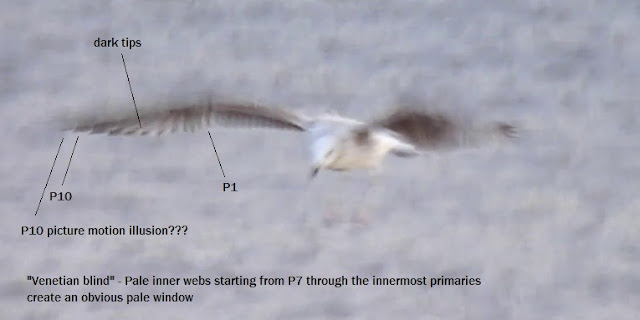 Although this could be tricky to evaluate from some snapshots taken from a video, the gull in question seems to show a pale window on primaries, both webs show some paleness with dark tips starting around P7, the "Venetian blind". 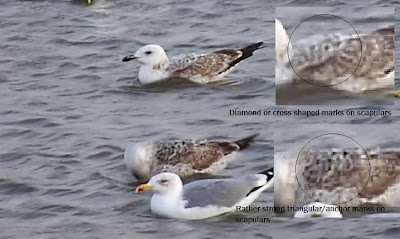 Regarding body plumage, saddle and coverts, everything points to caspian, even recently moulted scapulars seem to show the more subtle diamond/cross shaped marks of the latter, and 2nd generation pale grey feathers on mantle, paler than the 1cy yellow-legged gull near probably "lusitanius". The uniform brown wing coverts contrast  with the pale saddle, wich is a trait to 1st winter caspians, pale headed mediterranean yellow-legged gulls, often replace lesser, median coverts and tertials, wich is not shown by the ind. in question, or not as obvious in contrast like mediterranenan yellow-legged gull (see here and here), a little more defenition would be required to have certainty. Another good point in favour of caspian is the pale fringe on greater coverts, called the "Nike" swoosh, and visible in almost snapshot taken, when resting and in flight also. 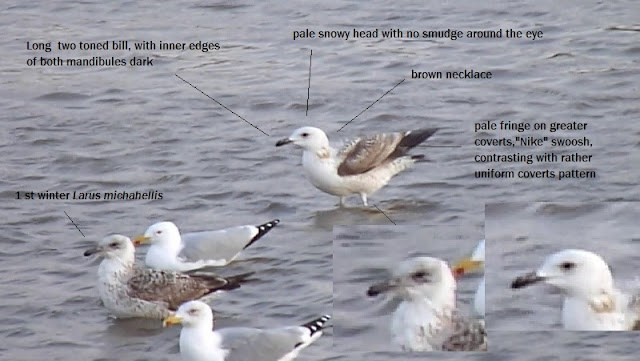 In the end of Sepetember a fellow birder, Pedro Ramalho spotted this pale gull at Peniche, with confusing traits that seem to be shared by both  Larus michahellis and Larus fuscus graellsii.
At first glance nothing wrong for a large male graellsii with heavy winter streaking and head structure, but grey tones of upperparts seem to fit michahellis better, and also orange gonys reaching the upper mandibule. 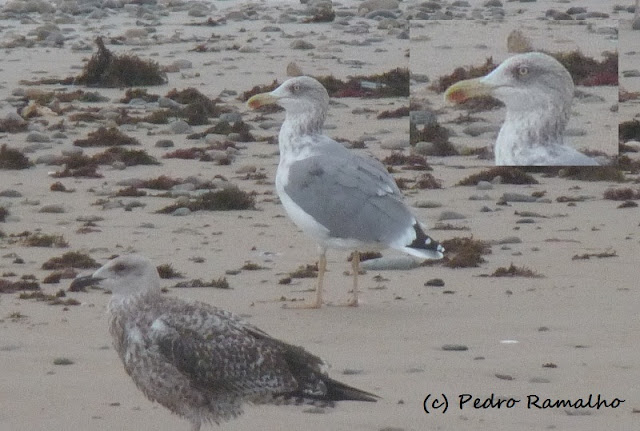 In fact an hybrid could not be discarded, most probably Larus michahellis x Larus fuscus graellsii. Lesser black-backed Gull was recorded for the first time breeding at Berlengas Islands offshore Peniche in 1977, when a mixed pair with YLG was detected, since then monospecific pairs have also breed, but hybridisation continues to take place, last known data from 1998 (L. Morais), 6 monospecific pairs and 17 mixed in Aves de Portugal 2010. 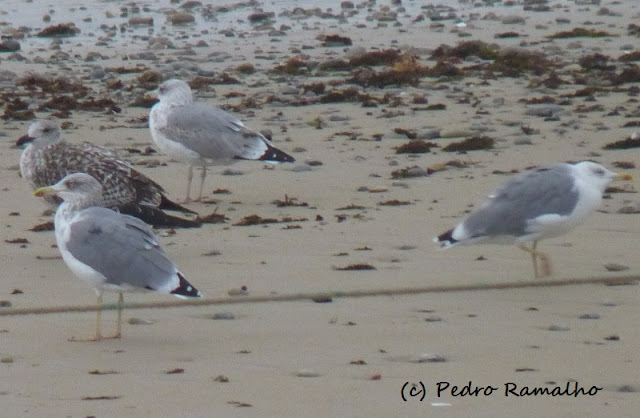 Some dark on primary coverts, so not probably a full adult, and primary pattern typical off Larus michahellis "lusitanius", with black spot on P4, but not excluding graellsii pattern, which could show black through P3 (Olsen 2003).
Any more ideas......???? 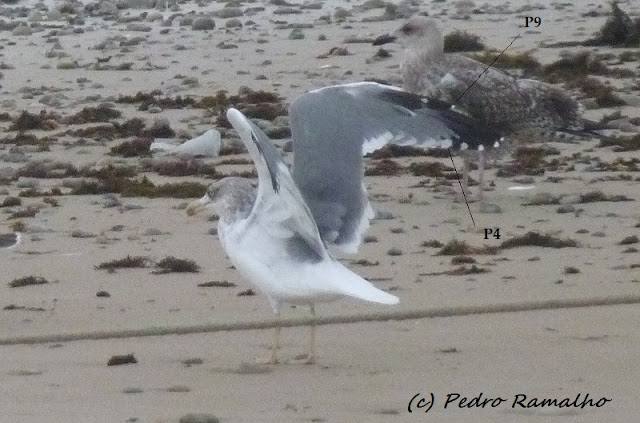